Power of the Sun Rays

What is vitamin D?

But do you know why? Similar to how plants absorb light and convert it into energy, our skin absorbs UV-B rays and converts it into vitamin D.  Vitamin D isn’t actually a vitamin at all. It’s a key hormone which influences 3,000 of your 25,000 genes and that affects your entire health.

Studies suggest that vitamin D is essential for many bodily functions.

Vitamin D helps the body use and convert calcium into a usable form. You can consume plenty of calcium and still have weak, brittle bones if you don’t get enough vitamin D because your body won’t absorb calcium without it.

Taking in fresh air and sunshine at a regular time each day stabilizes your sleep schedule by halting melatonin production. You’ll be less sleepy throughout your day — no more naps on your lunch break!

It has long been known that ultraviolet light has a sterilizing effect, because the radiation damages the virus’s genetic material and stops the virus’ ability to replicate. In addition, it also protects against microorganism invasion.  According to new research announced by a senior US official, “Our most striking observation to date is the powerful effect that solar light appears to have on killing the virus, both surfaces and in the air,” said William Bryan, science and technology advisor to the Department of Homeland Security secretary.

Vitamin D is a neural hormone, not really a vitamin. According to Dr. Blaylock, vitamin D helps if you are over-reacting immunologically to an inoculation shot by cooling down the reaction. Similarly, if you are under-reacting, it helps to boost your immune response. In addition, it also protects against microorganism invasion.

Ever feel down during the dark and dreary winter months? Seasonal affective disorder (SAD) is a type of depression that occurs when winter daylight hours are very short. The lack of sunlight can throw off your biological clock and sleep patterns, which can lead to an imbalance of serotonin levels and mood swings. Getting outside now that daylight hours are longer can help counteract the winter blues.

In 2005, the University of Pittsburgh found that natural light had a positive influence on patients in post-surgical recovery. Patients experienced less pain, therefore needing less medication to treat pain, and had improved outcomes overall. While an open window isn’t quite the same as being outdoors, having visible access to nature still has a positive impact.

At least 75% of adults don’t even get the minimum requirement for vitamin D. The problem is most Americans don’t get enough vitamin D, especially if they live in northernmost states and higher latitudes. Other factors such as air quality, skin color, lack of nutrients, medical conditions such as liver/kidney/gallbladder/gut disorders, being overweight, medications such as cholesterol lowering drugs, and age play a big role in how much vitamin D one can receive. Reduced time in the sun and lack of proper nutrients are the biggest factor to put you at risk for a deficiency.

There are many factors in our modern society that hinder efforts to get enough of those UVB rays in sunshine that help your body create vitamin D:

Environmental factors are as varied as smog and poor sunlight availability, season and latitude. Living in high latitude makes it much harder to get enough sun exposure.  Infections of the respiratory tract are more frequent in the winter months and especially in the northern latitudes than they are in summer. This obviously also applies to the COVID-19 infectious disease that briefly spread all over the world in the winter months and became a pandemic. A common feature of the winter months and the inhabitants of all countries north of the 42nd parallel is a hypovitaminosis D that frequently occurs during this period. Exception exists. In Scandinavian countries, the low incidence of vitamin D deficiency may be due to the traditional consumption of cod liver oil rich in vitamin D and A or to genetic factors resulting in higher synthesis of vitamin D in the epidermal layer.

Those who live in northern climates may not have enough hours of sunlight available during certain times of the year, limiting the amount of vitamin D their bodies can produce. In the United States, according to the University of Maryland Medical Center, people who live above the Los Angeles-South Carolina latitude may not receive enough sun exposure during the winter months. Similarly, if you live in a high smog or cloudy area you may also not receive sufficient amounts of direct sunlight. For your body to produce vitamin D through sun exposure, there must be no blockage between the sun’s rays and your skin, including light clothing and sunscreen.

Reduced time in the sun and limited dietary sources of vitamin D all conspire to put you at risk for a deficiency. Sunscreen and clothing blocks almost 100% of UVBs.

Those with darker colored skin have a more difficult time producing vitamin D-3, and their bodies may not generate enough to fulfill the daily requirement of 600 to 800 individual units per day. If you are concerned about your ability to produce enough vitamin D for your body, speak with your doctor to see if you should consider taking a supplement. Those from Black, Asian or ethnic minority backgrounds were found to be at much higher risk.

As a fat-soluble vitamin, vitamin D can’t enter your bloodstream unless dietary fats are present. These fats trigger the release of substances needed to digest insoluble nutrients, which don’t dissolve in water. Medical conditions that impair fat absorption also affect vitamin D absorption, which can deplete the amount in your system. Gastrointestinal disorders, such as celiac disease and Crohn’s disease, and surgical procedures for weight loss interfere with the body’s ability to absorb fat and vitamin D. Diseases of the liver or pancreas may prevent these organs from secreting the enzymes and bile that are essential for fat digestion, thereby affecting vitamin D levels. Bacterial overgrowth in the small intestine owing to diverticulosis or intestinal obstruction also interferes with the absorption of vitamin D.

Obese people have a hard time absorbing vitamin D. People who are overweight have less vitamin D in their bloodstreams, even when their intake matches that of people with normal weight. After it’s consumed, vitamin D is transported to fat and muscle, but it tends to accumulate in body fat, or adipose tissue, which releases it slowly, even when blood levels of the vitamin drop and your body needs more. The reasons that body fat hangs on to vitamin D remain unknown. While researchers continue to study the process, however, they stress that people who are overweight may need larger doses of supplements to maintain healthy levels of the vitamin.

Nutrient-depleting prescription drugs we are taking for those chronic illnesses.

Certain medications can deplete vitamin D. Mineral oil and some cholesterol-lowering medications inhibit its absorption. Weight loss products designed to reduce the amount of dietary fat entering your system also block all of the fat-soluble vitamins: D, A, E and K. Long-term use of antacids may deplete vitamin D by changing your body’s ability to convert the vitamin into its active form. Calcium channel blockers used to treat high blood pressure may decrease the amount of vitamin D produced by your body. Antacids or anti-seizure medications, and certain cholesterol lowering medications, including Cholestyramine and Cholestipol will lower the amount of vitamin D your body can absorb and maintain.

The more you age, the harder it becomes for your body to produce vitamin D-3 from sun exposure. This is a natural consequence of aging, but the problem is compounded by the fact that vitamin D requirements are higher as you age. The daily recommended amount for those over the age of 70 rises to 800 individual units. It is also recommended for those over the age of 50 to consume more vitamin D to offset the potential development of osteoporosis.

The top vitamin D researchers are now proving that the “minimum amount” isn’t high enough… and that basically 99% of the population is vitamin D deficient in reality.

Although 600 IU is enough to make sure you don’t get a deficiency disease (like rickets!) — it’s not enough to ensure optimal levels of vitamin D in your bloodstream. Many holistically trained practitioners recommend at least daily intake of 2,500 IU of vitamin D3 as a minimum.

What is very important is vitamin D3, which is the only ‘vitamin’ the body can manufacture from sunlight (UVB). 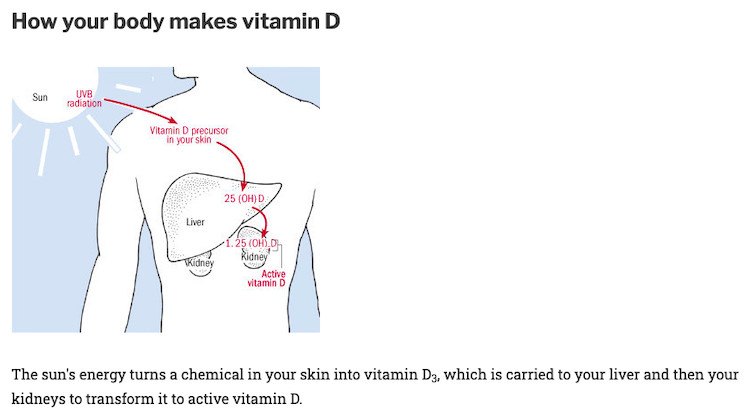 Interestingly, vitamin D deficiency is a condition that can be easily and cheaply remedied.

The most efficient and effective way to make vitamin D is to spend a little time in the sunshine without sunscreen. How much time you need to spend outdoors depends on your skin type, color, medical condition and other factors. General rule is that expose as much of your skin as possible under direct light. Your body starts creating vitamin D (maybe 5 minutes to some and 20 to others). You’ll know its time when your skin turns pink. Then you may put your safe sunscreen on to make sure you don’t get sunburn – cause of aging and skin cancer. Know your body or consult with a trusted health care provider. Why supplement with vitamin D when spending some time soaking up the sun helps your body produce much of the D vitamin it needs? If you can’t receive adequate amount of daily sunlight and cannot consume it through nutrients, then take a supplement. In the article, I share the importance of how, why, how much and what time of day to receive the full benefits of the sun.

Eat foods that are naturally rich in vitamin D such as:

Vegans have to be vigilant about receiving vitamin D from other than food source as the foods rich in vitamin D3 are animal based. Avoid foods that are fortified with synthetic vitamin D2, as this form of vitamin D can be toxic in the human body.

If you need additional help, supplementation should be the last option.
You may need to supplement with high quality vitamin D if you:

Desk jobs and sunscreen have changed the way our body remains healthy and in a balanced state. Remedy is simple. Instead of modern solutions of drinking some low-fat fortified milk, or resorting to judicious doses of vitamin D supplements, just go back to basics that are life giving. Exercise outdoors while you get a “healthy” tan. Take several breaks during the day to expose your body to the healing powers of the sun rays. Barring factors mentioned above that deplete your vitamin D, your body will make the vitamin D it needs.

Disclaimer: Do your own homework. Research beyond the mainstream media. The above is for informational purposes only and is not intended as a substitute for advice from your holistic practitioner. The information is not intended to diagnose, treat, cure, or prevent any disease. I am not making any recommendations or offering any suggestions how you should or shouldn’t handle your personal situation.

Is it Food Allergy or Intolerance?