Is News of Tapeworm in Salmon Sensationalized? 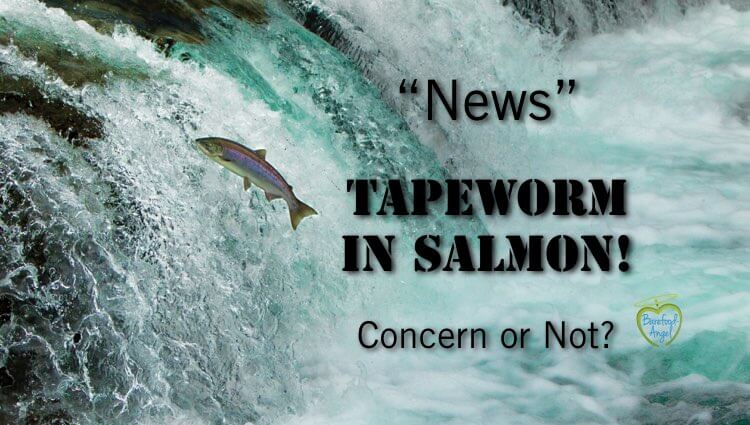 Reading the latest headlines referencing a scientific study about tapeworm species in wild alaskan salmon may leave you feeling disgusted and concerned about health factors.

The original news story misinterpreted the study turning it into a cautionary food safety issue.

The study was done to assess marine tapeworm species. To conduct the research, several different species of salmon were collected from sport harvesters from a non-commercial harvest area, and the fish was not commercially processed.

There is a difference between consuming wild fish in raw state or one that hasn’t been frozen according to proper health standards and fish that is wild yet commercially produce.

It is important to note these facts:

Dr. Jayde Ferguson, a co-author of the study and scientist at Alaska Department of Fish and Game claims that “The study has been misinterpreted. The study wasn’t designed for and shouldn’t be relied on for food safety guidance.”
Media reporting of Alaskan Salmon being contaminated with tapeworm is inaccurate.

According to Wild Alaskan Seafood, media reporting of Alaskan salmon being contaminated with tapeworm is inaccurate. While one species of tapeworm was found in an Alaskan pink salmon, this is not an indictment of the greater Alaska salmon commercial catch, which is intended for consumer consumption. Further commercial pink salmon is sold to consumers canned or frozen. Only 0.6% of pink salmon is released fresh (2015 data) and no commercial harvest of pink salmon in freshwater streams takes place.

USA Today reported on January 13, 2017  that a new report from the Centers for Disease Control and Prevention says some wild Pacific salmon from Alaska was found to be infected with tapeworms. Their source originally came from Newser on January 12, 2017. The article went on saying that researchers identified the Japanese broad tapeworm, aka Diphyllobothrium nihonkaiense, in wild pink salmon caught off Alaska: as if this is new information to panic about.

They referenced a study in the CDC’s Emerging Infectious Diseases journal. “Therefore, salmon from the American and Asian Pacific coasts and elsewhere pose potential dangers for persons who eat these fish raw,” write the researchers.

Inaccurate and Out of Context Reporting

Out of Context Reporting

Jayde Ferguson, a state wildlife official who co-authored the study, tells Alaska Dispatch News that the discovery shouldn’t be much cause for alarm among consumers. “If it was anything that was of concern, increased risk or anything like that from a management standpoint, we would have said something,” he says. “They’re wild animals—they’re going to have parasites, they’re out in nature.”

CNN reported that ” US Salmon may carry Japanese tapeworm” going on saying that Jayde Ferguson, a co-author of the new study and a scientist at Alaska Department of Fish and Game said “The tapeworm itself is probably not new — it’s just that more skilled parasitologist started looking for it. Identifying these parasites is challenging,” said Ferguson. “This was simply a more detailed evaluation of the Diphyllobothrium that has occurred here for over a millennium.”

Ferguson says to Washington Post ” infectious disease experts are improving their ability to distinguish the Japanese broad tapeworm from other sorts of tapeworm parasites.”This worm has always been here, and we’re just getting better at identifying it.”

The CDC never issued a warning. The study was published in the CDC’s monthly journal, Emerging Infectious Diseases, but did not caution consumers.  GoodHouseKeeping updated their previously reported article with misinformation. We applaud their good journalistic practice.

The CDC notes that cooking the fish also will annihilate Diphyllobothrium parasites.

The FDA requires that all seafood is either frozen at -4F for 7 days or cooked to an internal temperature of 140F to effectively kill any parasites. Flash freezing practices kill off parasites. Home freezers can not do that.

According to Randy Hartnell from Vital Choice parasites in fish (birds, land animals, people, etc.) have been around nearly as long as life itself, and are a 100% natural and ‘organic’ phenomenon that go along with consuming wild food raised free of chemical pesticides and veterinary drugs.

We don’t live in a disinfected bubble. We wouldn’t want to.
Parasites, critters, bacteria, viruses have been around as long as life has been around. We can attack these critters but they will always outsmart us. Instead of battling them using irradiation, chemical warfare and other dramatic modern practices only to produce super bugs and critters and killing us in the process, let’s learn how to work with nature.
It is wonderful to have modern medicine to fight off a bug that is beyond our control. However, using a regular practice of battling them using chemical arsenals or avoiding consuming foods that nourish your body is only going to leave us weak and defenseless and prone to disease.
It is the living organisms that keep life in balance on earth. And in case of bacteria, we are more bacteria than cells. Can’t live without living organisms around us. Wouldn’t want to kill them off. We would literally kill ourselves in the process over time.
This doesn’t just happen to animals. Remember the news a few years ago about recall of some organic and conventional stone fruits for Listeria contamination or the Hepatitus A outbreak from frozen berries?

Usually source of these food born illnesses in plants is linked to an industrial food system of mass production with run off water from nearby CAFOs or the use of pesticides that weakens the plant’s natural defense systems.

Then  illogical “solutions” like irradiation, chemical warfare or pasteurization are applied to kill the bug and in the process kill the food. The reason we consume food is because of its live nutrients, vitamins and enzymes.

Pests, bugs, critters, bacteria, viruses, parasites are all part of living nature. Believe it or not, they have a tremendous contribution towards balancing life on earth.

We need Omega 3 essential fatty acids for so many reasons. They are “essential” because your body can not produce it on its own. It needs to consume it from your diet.

According to Dr. Mercola, traditionally, only two fats are considered “essential”—ALA (an omega-3 fat) and LA (an omega-6 fat). However, we now know it’s the long-chain derivatives—arachidonic acid, DHA, and EPA—that your body needs the most.

GreenMedInfo.com lists over 400 studies  supporting the benefits of omega-3s for 254 different diseases, which is powerful proof of their broad-reaching scope. One reason omega-3s are so good for you is their anti-inflammatory properties, especially the omega-3s from animal sources.

When feeling yucky reading about critters around us, know the facts before taking drastic measures like cutting off an amazing source of Omega 3 essential fatty acids from this animal source.

According to Dr. Oz, ocean fish, including salmon and cod, commonly carry tiny roundworms called ascarids. However fewer than ten cases of ascarid infection occur annually in the United States according to the U.S. Food and Drug Administration’s “Bad Bug Book” for 2012.  The extreme rarity of such infections is easy to explain, because these tiny creatures are killed by cooking and freezing.
As food writer and author Steven A. Shaw wrote in the July 15, 2007 edition of The New York Times, “If you take raw and partly cooked shellfish out of the equation, the risk of falling ill from eating seafood is 1 in 2 million servings, the government calculated some years back; by comparison, the risk from eating chicken is 1 in 25,000.”
Buy from fishermen that follow safe protocols. Reputable sources of seafood will take all the precautionary measures to inspect and remove diseased animals. Unless you have a very weak and compromised immune system, his is far preferable to using the toxic pesticides applied and fed to farmed salmon.
Consume previously properly frozen, rather than ‘fresh’ fish, especially when it comes to sushi. In fact, most sushi is deep-frozen prior to use for this reason.
Abandoning properly frozen or cooked seafood to avoid these creatures would be both pointless and certainly counterproductive to your health.

They follow FDA/CDC recommendations, which ensure the death of any and all parasites. The only salmon they purchase and sell are four species of wild Pacific salmon. Vital Choice assures no radiation PLUS they meet the EDF’s guidelines for eco friendly fishery practice AND lowest contaminant level and more. Take a look at the protocols that are followed by Vital Choice

I do hope that this information will help you know what options you have so that you can make the most informed decisions. I am not telling you how you should or shouldn’t do. For my full Disclaimer, please go to the Disclaimer page on my website https://barefoodangel.com/disclaimer/.